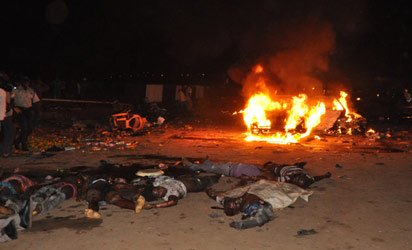 There have been multiple bomb blasts by suspected Boko Haram terrorists in Abuja, the Nigerian capital, with two explosions recorded in Kuje, a suburb of the city.

The first occurred in front of the police station, while the second occurred at the town’s main market, 15 minutes apart from other.

A third explosion was reported at Nyanya Bus Station thereafter. Nyanya was the scene of two bombings in 2014, leading to scores of death.

Abuja, a bit remote from the frontline of Boko Haram war had seen several bombings, beginning from the attack on Police Headquarters in June 2011, UN Headquarters in August 2011, Nyanya Bus Station, April 2014 and Barnez Plaza in June last year.

All the bombs were claimed by Boko Haram.